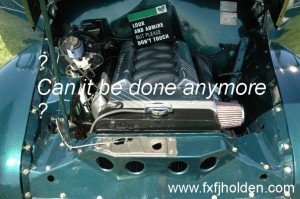 You would think that each state would be similar or the same when it came to modifying a FX or FJ Holden. How wrong could that statement be. !!!

Each state has different rules and regulations and each State Motor Registry are in the process of slowly adapting the National Code of Practice. The ACT already has and other states are soon to follow (if they already havent).

Below is some links to each states rules and Regulations.

The Western Australian government have a Current Code of Practice for Modified Vehicles ? – Click here to see more details from the WA government site

The Tasmanian government have their own Code of Practice for Modified Vehicles. You will need to discuss any modifications with an engineer first. A list of the authorised engineers is here An application form is also required.Click here for modification application form